Machine virtualization is a big deal in IT these days. A virtual machine is an environment which appears to a “guest” operating system as hardware, but is simulated in a contained software environment by the host system.

In other words, I can be running my normal Windows XP session at work and pull up a fully running Linux installation in a window. Or I can run my Ubuntu Linux OS at home and pull up Windows 2003 Server in a window. Or a million combinations in between. 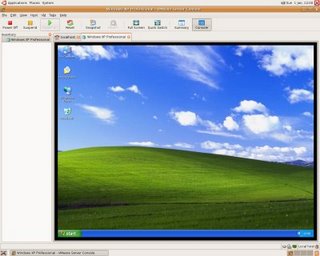 Machine virtualization also has a lot of uses for desktops and developers. I can use a blank Windows virtual machine (XP, 2000, Server, 98, even ME - though that’s just gross) to test installing desktop applications. I can test Linux distributions without having to repartition my hard drive. I can try software packages in a virtual machine so I don’t bloat my regular Windows registry with software I may be uninstalling. And on and on.

The reason why I decided to mention this here is VMware, arguably the biggest player in the machine virtualization field, released the final version of VMware Server (1.0). VMware Server and VMware Player (which only allows you to “play” premade virtual machines, not create your own) are absolutely free. You can get them here. I’m running VMware server on Windows now and I’ve been running it on Linux since the early betas and both work extremely well. If you have the ran and processor cycles, the guest OS will run pretty much as fast as it would as a host OS.

If you have IT overlords that are somewhat on the over-lordy side, you should probably consult them before you start tossing virtual machines on the network. Don’t install something if you don’t know what you’re doing. If you set up a virtual machine that starts handing out IP addresses on your network or some other such thing, you will probably get yourself in hot water.

One sour note - if you’re a Linux user and think this is the cure to your gaming blues, forget it. The guest OS doesn’t have access to the graphics card directly - it sees a virtual, perfunctory VMware graphics engine with no 3D support. Ah well, you can’t have everything.

Give virtualization a try. I think you’ll find a lot of good, practical uses for the software. And it’s free.


Without the coolest application of VMware server is allowing me to run my GuitarPort software in a virtual Windows XP session.