Brian Timoney’s post How the Public Actually Uses Local Government Web Maps: Metrics from Denver really got me thinking about things I could be doing differently with web maps. One of them was creating easily embedded, single-topic web maps, which will go great with our newly redesigned open data portal, should that actually happen (damn you giant-pile-of-crap-on-my-desk). You can view the prototype here or check out the code on Github. It isn’t done, but it (mostly) works and since I’ll be sitting on it for a while I figured I’d go ahead and release the code in case anybody finds it useful. It’s using Leaflet and Twitter Bootstrap. 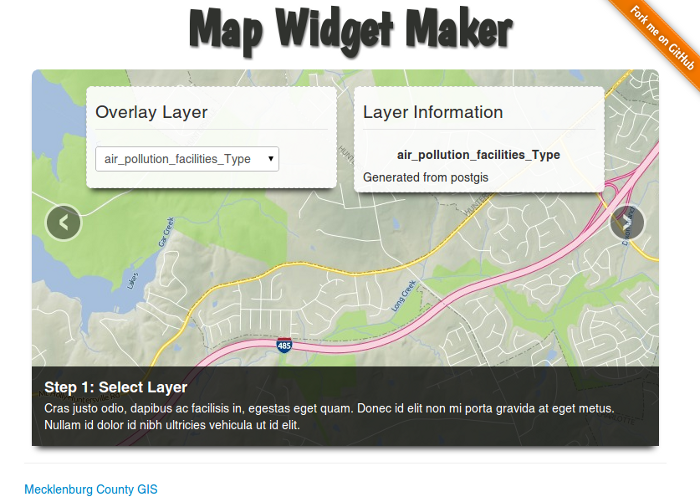 Yes, I picked that title font. Yes, I kind of regret it now.

Basically it creates iframe embed code for a map, ala YouTube video embeds. You give it a config.json file like so:

You’re giving it some options for base maps (tiled zxy stuff). Then you’re giving it a WMS server to connect to and a few other options like attribution and default map center/zoom. Pretty straight-forward. Then your users can make their iframe embed code and plop it on their page in a quick and easy 3-step process. Ideally your WMS layer info is better than mine so you’ll get clean WMS layer names and info instead of “Generated from postgis”, though we both know it isn’t.

Edit: Gads! I forgot to give credit where credit is due - Bryan McBride’s GetFeatureInfo Leaflet example was a big help in getting the identify function working.