One of the first projects I ever open sourced was a PHP web service framework I created for Mecklenburg back in 2010. It got a little coding love after its initial release (mostly from that mad genius Jason Sanford), but it really didn’t change much over time. It generally just worked, and I still get emails from people who use it today.

Q: What’s the worst code you’ve seen recently?
A: My own.

A little while back I did a screencast on the Ubersearch autocomplete thing, and when I dug into my old code I did a lot of frowning. People describe bad code as having a smell, but 3 cats have burned out my olfactory sense. Bad code gives me visual hallucinations. When I see bad code, I see this. 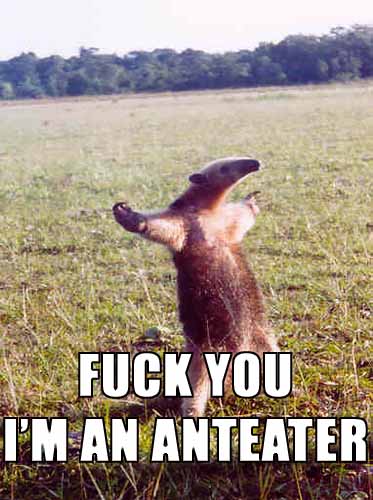 My bad code totem animal is an anteater.

I think if you can always say the worst code you’ve ever seen is the code you wrote 6 months ago, you’re a good programmer. I wrote this code years ago. I saw a giant anteater when I looked at this code.

Part of me wanted to just point people to CartoDB, which is like the Cadillac of this kind of stuff, but people still seem to be interested in this project, and there is something to be said for a really simple solution like this (the dependencies for CartoDB would choke a pony). So, I scrubbed it and tossed the new release on GitHub. Among the changes are:

Enjoy, and patches are always welcome.