Brothers and sisters, I have a mechanical keyboard problem.

I have owned at least 10 mechanical keyboards. Full size and tenkeyless. Tactile and linear. Clicky and silent. Blues and Greens and Browns and Reds. Cherry MX and Gateron and Kailh and a bunch of no-name switches. My wife and son have mechanical keyboards I forced on to their desks and they tell me they like them but they do so in the manner of someone holding up their hands to a crazed street preacher while backing slowly away and saying “ok…ok…”.

So for the new year, naturally I got another mechanical keyboard.

Yeah, it’s $45 of ugly. When I saw it in all its ugly, my first thought was “it looks like nurse shoes”. It came with a particularly unpleasant set of no-name Brown switches (silent tactile), and the font was what could only be described as a mistake. RGB though, so…victory?

But I didn’t pay $45 for any of that. What I paid for was a hot swap PCB and a removable top cover held on by magnets.

Off to pay twice that and more on mods. 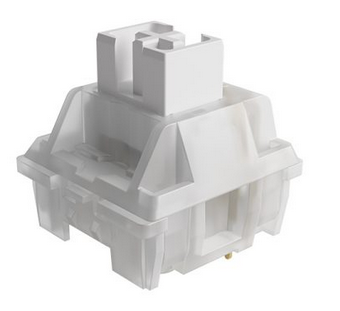 The switches had to go. They felt like eating dirt. And they were stiff, I’m guess 50-60g activation force. What, am I working out here? No. So I went with Akko Jelly White, a feathery 35g linear switch. Buttery smooth and light.

The keycaps had to go. The font was terrible, the translucent color made them hard to read unless you set the RGB to eye-searing levels, and they were paper thin. Ick. Again I went with Akko and grabbed their Carbon Retro set. Double shot PBT yo, and not shine through. I prefer the RGB glow around the keys and not through them, it makes the effect more subtle and the keys are easier to read. A bit of a splurge for this project, but they are glorious. The letters are more of an aged white in person.

There’s a technical term among mechanical keyboard enthusiasts called “thocc”. This word describes what a mechanical keyboard should ideally sound like. I have been around guitars long enough to know tone-related horseshit when I see it. Thocc is pure grade-A horseshit. 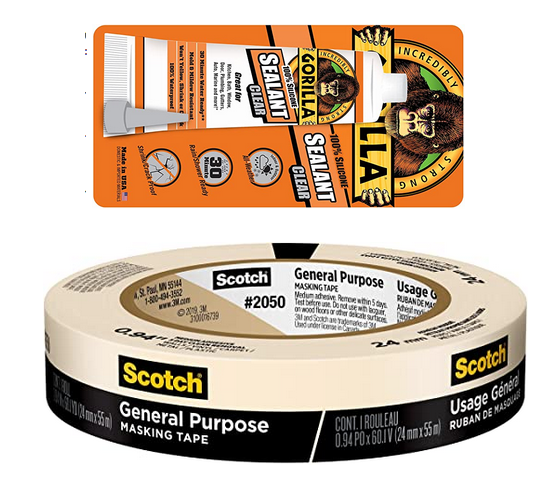 So the clear and obvious thocc problem with this keyboard was the housing. Hollow and plastic and pingy (very little deck flex though - it’s well built for $45). So I lined the bottom with silicone. This added weight and noise dampening and burned out most of my nose hair while applying it, all good things. On the bottom of the PCB I put masking tape. This is called the “tape mod” on Reddit and because it has a name it must do something. In between the silicone and tape I put in a sheet of the thin packing foam the board came in, which is called the “foam mod” so it also must do something but it was mostly because I didn’t want the silicone bonding to the tape and/or PCB.

And now, a moment of thocc.

Finally, I couldn’t pimp out everything else and leave the keyboard cover/surround nurse shoe white. I painted it orange, dropped some pinstripe tape here and there, and painted over that in black. Peel off the tape for some cool orange stripes. Drop in the new switches and caps, put it all back together, and you get this: 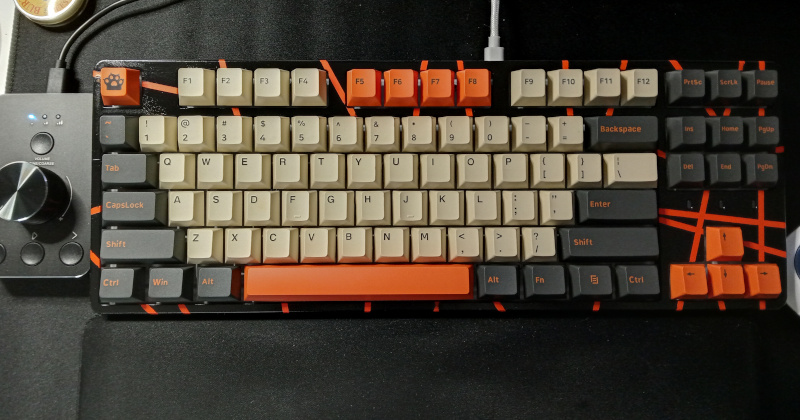 Eddie Van Halen fan you ask? Yes. Yes I am.

Should you make your own custom keyboard like this? Let me answer that question this way. No. No you should not. I say this because the majority of you are normal people, and normal people have better things to do. Sure you bang away all day on Dell scissor switches like filthy animals. Does that make you bad people? Well…no? We’ll go with no.

But for me personally, I go to sleep at night thinking about typing on this keyboard. I love this thing. I doubt I’ll ever need another keyboard for the rest of my days. Unless it’s a 60% keyboard. I haven’t tried one of those yet.